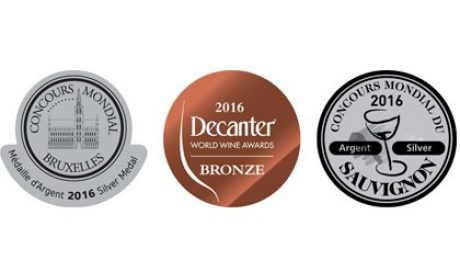 The Vinos’s Sanz Finca La Colina wines have been consolidated as the best Spanish white wines among the best in the world. This spring, the dean winery of the Denomination of Origin Rueda, has won a medal in the three world-renowned wine-making competitions. Its variety, Finca La Colina Sauvignon Blanc, have been awarded with the Bronze medal at the Decanter World Wine Awards (DWWA) and the Silver medal at the Concours Mondial du Sauvignon. Finca La Colina Verdejo Cien x Cien have been also awarded as with the Silver medal in the Concours Mondial de Bruxelles, in addition to the mention achieved in the DWWA.

Finca La Colina is one of the few wines recognized with medals in 2016 in the three major international competitions, from which it accumulates a total of 21 metals between 2010 and 2016. “This is not a matter of luck,” says Ana Carbajo, Sales Director of Vinos Sanz. “Experts from many countries have valued the work behind our wines,” she adds. During the last six years, other national and international prizes such as Gold Bacchus, Great Gold Zarcillo, Gold Zarcillo and the Gold Medal of Mundus Vini are added to the mentioned ones.

On the other hand, Finca La Colina Sauvignon Blanc rises from 91 to 93 points in the Peñín Guide 2016. Once again, part of the exclusive club of ‘the best wines of Spain’, those that the illustrious catalog places between 93 and 100 points. Finca La Colina Verdejo Cien x Cien is once again touching Olimpo, maintaining the 91 of 2015. “Every harvest is different and the raw material does not always allow you to get better results,” says Ana Carbajo. “Over the medals, our main prize is regularity,” she adds.

His Bronze in the DWWA 2016 “definitively consecrates” the Finca La Colina Sauvignon Blanc at the international market, after having won the Gold Medals in Sauvignon and Brussels in 2015. “Despite being highly valued in the World Sauvignon Contest since the first year, the Decanter award had been difficult to achieve”, acknowledges Ana Carbajo. “The Sauvignon Blanc grape is produced in many countries and present different nuances in each region,” she explains. Although this year the Silver Medal reinforces its prestige in Sauvignon, the Bronze of the Decanter “is a recognition to its singularity”. Finca La Colina Cien x Cien Verdejo renews its Silver in the World-wide one of Brussels.

Finca La Colina has competed with wines from the five continents between the three major contests. More than 16,000 international samples have participated in the DWWA 2016, the largest global competition in the sector. Its 244 judges including 69 international wine masters, as well as sommeliers, regional experts and journalists. The blind tastings of their week of tasting took place from 25 to 29 April at Tobacco Dock, East London. His full list of results is published on June 6 at Decanter.com.

In addition, more than 9,000 varieties from 46 countries took part in the 23rd Concours Mondial de Bruxelles, from 29 April to 1 May in the Bulgarian city of Plovdiv. 320 judges chose the winners of the first contest that establishes a posteriori control of the winning wines, in order to guarantee the legitimacy of their results. On the other hand, from the 4th to the 5th of March, the Valladolid region of Rueda hosted the seventh edition of the Concours Mondial du Sauvignon. 74 judges from 23 countries sampled nearly 900 international samples.

“Each harvest implies the new challenge of maintaining or exceeding the previous level of quality,” recalls Ana Carbajo. “For our wines to maintain their strong personality and their own style, it is fundamental to continue the same line of elaboration,” she adds. “The national and international awards not only reward the work months of each vintage, but also endorse the regularity of a path,” she concludes.

The Verdejo and Sauvignon Blanc grapes from the Monovarietales Finca La Colina are obtained from the oldest vineyards of the Sanz Vinos vineyards. Both Verdejo Cien x Cien and Sauvignon Blanc “are of great complexity, elegance and expressiveness”, emphasizes Ana Carbajo. Comprehensive care, rigorous selection and low and controlled productions characterize its elaboration. “A real jewel inside a bottle”.

The Finca La Colina Cien x Cien Verdejo and Sauvignon Blanc (left) are born in the oldest vineyards of Vinos Sanz (right). VS.

Challenges of the 21st century

Founded in 1870, Vinos Sanz is the oldest winemaker of the Denomination of Origin Rueda. Six generations have taken care of the vines of Verdejo and Sauvignon Blanc from their Castilian fields, which now house about 100 hectares. When the wine was marketed at 12 reales per arroba and was transported in ox and mule wagons, the Donatos family bet on an indigenous and then unknown strain, Verdejo. The splendor of Vinos Sanz comes from its grapes, sprouted from a hard earth that imposes its differences. Its elegance in the glass translates the effort of climate, soil and man.

In 1980 the D.O. Rueda consecrates the quality of white wines of a unique variety in the world. Vinos Sanz updates the wine technology of its winery so that the alchemy of the wine grape expresses the personality of its vineyards. Among its challenges for the 21st century, to consolidate the international projection of a brand present in the markets of 20 countries. Currently, the company is reviewing the architectural project of a second winery in the heart of Rueda.

In 2013 Vinos Sanz undertakes its own project in the D.O. Wines of Madrid. For this adventure, the company has the collaboration of Orusco, the oldest winery in the region. In May of 2015born the first of its wines, Sanz La Capital, with grapes of old strains of Tempranillo of Madrid. A fruit red wine as a project of past, present and future, continued with Sanz La Capital Roble.